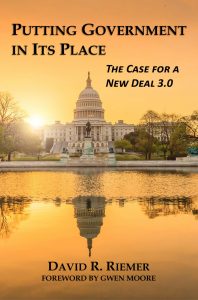 Franklin Delano Roosevelt’s New Deal changed the course of history and fundamentally altered the role of the U.S. federal government. It was so successful that decision-makers continued adding policies and programs to it over the next 80 years to adapt it to new challenges and areas of concern. But since the 1970s, the New Deal’s original programs and ad hoc additions have sputtered in the face of rising international competition and highly disruptive technology. For decades, we’ve made little progress—often seen as deterioration—in economic security and market regulation.

So, has the New Deal era ended?

Not at all, argues David R. Riemer in "Putting Government in Its Place: The Case for a New Deal 3.0" (HenschelHAUS, October 2019; hard cover, $29.95, paperback, $19.95). In fact, it’s the perfect time to update the New Deal to address our 21st century concerns, such as decent-paying jobs, health insurance and education, a clean environment and a marketplace that does not harm us, a fixed-up infrastructure, and a tax system that is fair, simple, and less bureaucratic. Taken together, Riemer’s vision for a New Deal 3.0 would reduce racial disparities and injustice and help to stop the rising tide of inequality in income and wealth.

Riemer is the Founding Director of Community Advocates Public Policy Institute, which is co-sponsoring his book launch at 7 p.m. on Wednesday, November 6, at Boswell Book Company, 2559 N. Downer Ave., Milwaukee.

RSVPs are appreciated to help us plan for the evening. Please register at the link below.

From the Foreword by Gwen Moore

“Of greatest importance, the book makes a highly persuasive case for why a sweeping redesign of the New Deal model—a New Deal 3.0—is now necessary to undo the inequality and uncertainly that are tearing our country apart. It makes a compelling argument for how to get America back on a path of equitable and enduring economic security for unemployed, underemployed, working, disabled, and retired seniors (including health insurance, long-term care, and education reforms), and how to more effectively regulate markets to prevent damage to the environment, workers, consumers, and investors.”

Advance Praise for Putting Government in Its Place

“David Riemer provides the reader a challenging diagnosis of our public condition today and then offers his fresh and his original vision for a better tomorrow. A book every candidate and every citizen should read before the 2020 election.”—Mark Shields, PBS NewsHour political analyst and syndicated columnist

“David Riemer does an excellent job identifying the challenges America faces in crafting a New Deal 3.0. And he takes an important step further, by presenting solutions, sometimes provocative ones, to move our nation forward. An engaging read.”—Tom Barrett, Mayor of Milwaukee

“David Riemer is brilliant and is a rare bird. Very few people argue for an economy that includes everyone and uses the word ‘justice.’ David pulls it all together, from FDR to right now. He gives a map for economic justice and tells us how to get it done. This book is smart and wide. Read it.”—Peter Edelman, Carmack Waterhouse Professor of Law and Public Policy, Georgetown Law Center

“His arguments are drawn from a lifetime of experience in government, research, and advocating for the less fortunate. This book is a must for anyone who cares about the state of our union.”—Kenneth A. Germanson, President Emeritus, Wisconsin Labor History Society

“David Riemer’s new book is a must read for anyone interested in federal social programs’ public policy in the 21st century. First, it provides a historical comprehensive account and superb analysis of how we got to our current programs and their respective structure. His legal and public policy training and experience form the basis for his ideas and prescriptions for what our country needs to change—they would be considered ‘disruptive’ in today’s parlance—to better serve our residents. Though not all will find David’s perspective to fit their own, all will find his contribution a compelling discourse and one that we should seriously consider.”—Enrique E. Figueroa, Ph.D., Emeritus, Associate Professor, Department of Urban Planning, University of Wisconsin-Milwaukee

“Part history, part economic theory, David Riemer’s new book, Putting Government in Its Place: The Case for a New Deal 3.0, clearly delineates the successes and failures of FDR’s New Deal and the many follow-on policies that came after World War II. But, perhaps most importantly, he offers in his work thoughtful ideas and policy prescriptions for a New Deal 3.0 that he convincingly argues would ‘create a comprehensive structure of economic security for all Americans.’ Leaders in state capitals and Washington, D.C., should take heed; Riemer’s work warrants a close review.”—Michael Morgan, former Secretary of Revenue, State of Wisconsin

“It is important to give credit for massive sea policy changes in the basic ‘social contract’ of government with its citizenry. But government’s duty is to continually evaluate whether what served best in the past serves best for the future. Riemer’s book compels us to do just that. And he goes yet a step further by posing what a better government, a better future could look like. That is why it ought to be a ‘must read’ for all of us citizens.”—Kathleen Falk, Dane County Executive (1997-2011) and former Regional Director, U.S. Department of Health and Human Services

“So much rhetoric today is about good vs. evil. Sadly, sometimes that’s appropriate, but if you want to actually improve government policy outcomes read David Riemer’s Putting Government in Its Place. Mayors, governors, legislators, policy analysts, and concerned citizens will be inspired when they’re reminded that with thoughtfulness and determination public policy can significantly improve people’s lives.”—John Norquist, Mayor of Milwaukee (1988 to 2004) and former President and CEO of Congress for the New Urbanism