Spotlight On: Binge Drinking in Wisconsin 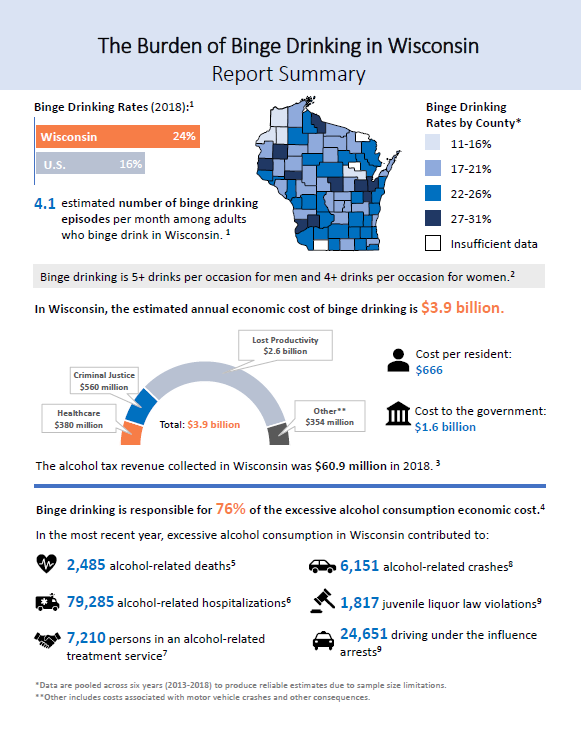 What costs Wisconsin government and residents close to $4 billion a year and could be totally avoided?

Binge drinking, which costs the government $1.6 billion a year and each resident $666 annually.

Those grim figures were tallied by the University of Wisconsin Population Health Institute in its October report, the “Burden of Binge Drinking in Wisconsin.” The study defines binge drinking as five or more drinks per occasion for men and four drinks or more for women.

“The results of this study show a staggering economic impact to the state,” the authors write. “It has been shown that the economic impact of excessive alcohol consumption is comparable to that of other health-risk behaviors, such as smoking and physical inactivity.”

Economically, binge drinking costs Wisconsin in $2.6 billion in productivity losses, along with $560 million in criminal justice costs, $380 million in health care, and $354 million in other costs, including motor vehicle crashes.

Although the total cost to Wisconsin is $3.9 billion, that’s not even close to being offset by state alcohol tax revenue, which generated $60.9 million, or 1.6% of the cost, the report’s authors note.

Binge drinking is a subset of excessive drinking, which also includes heavy drinking, defined as 15 or more drinks per week for men and eight or more drinks per week for a woman, as well as any alcohol consumption by young people under 21 or pregnant woman. Taken together, excessive drinking in Wisconsin contributes to 2,485 deaths per year, 79,285 hospitalizations, 1,817 juvenile liquor law violations, and 6,151 vehicle crashes.

An estimated 22% of Milwaukee County residents binge drink, slightly under the state average of 24%. The annual economic cost to Milwaukee County is $594.3 million, with 481 deaths on average annually that are attributed to excessive drinking.

Interestingly, in Wisconsin, much of the power to regulate alcohol sales and consumption rests at the local level. To learn more about what residents and elected officials can do to create a healthier alcohol environment, check out this presentation by Julia Sherman of the Wisconsin Alcohol Policy Project as part of the Alliance for Wisconsin Youth and the Milwaukee County Substance Abuse Prevention Coalition’s Changing Your Alcohol Environment series in October.