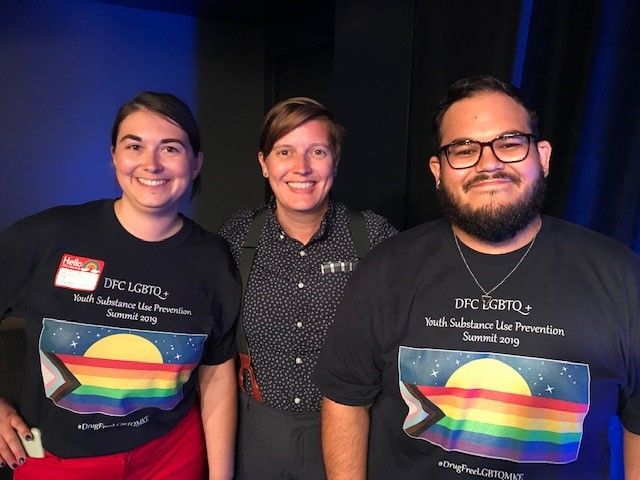 Members of the LGBTQ+ community and their allies gathered to provide support and connection at Milwaukee’s first LGBTQ+ Youth Substance Use Prevention Summit at the Stackner Cabaret on August 8.

The evening's big takeaway? That the power of personal connections is vitally important to living substance free. In addition, refraining from using drugs, alcohol, or nicotine can help a young person make healthy decisions about their behavior, including sex.

“Who you’re around really does influence what you do,” said Stacy T. Clark, Program Coordinator for the Intersectionality Among Men (IAM) Project for Diverse & Resilient.

Elle Halo, a Public Ally placed at Health Connections, Inc., said that LGBTQ+ individuals are more likely to have substance problems or smoke than the general public, but it’s likely that transgender individuals have even greater health disparities, although we lack solid data. Halo said substance use is a common coping mechanism for stress, trauma, stigma, homelessness, and lack of inclusion, but young LGBTQ+ individuals should find ways to make healthy choices, even when it’s difficult.

“People will exclude you from things when you don’t abuse substances,” she said. But when you stand up for yourself and make healthy choices, “they actually look up to you. Eventually, you will find yourself surrounded by like-minded people.”

Ryan Shorey, Assistant Professor of Psychology at UW-Milwaukee, said peer influence to use substances is especially acute when individuals are 15 to 25. That said, he stressed that we perceive that substance use among LGBTQ+ individuals is high, so it seems like a normal activity, even if it's not.

“The rates are high, but they’re not as high as you think,” he said.

He offered ways for people to reject substances when they’re offered to them, including saying, “I don’t use,” “I’m not going to drink tonight,” or “I have practice tomorrow,” or to simply have a cup of water in your hand, which others will think is alcohol.

“Hearing someone say no is a relief to other people,” he said. “The pressure starts to go away.”

Lady J. and Montell Infiniti Ross screened videos they’d created for the Tobacco Free Pride campaign about their journey in quitting smoking, then discussed their experiences.

Although it was difficult, Ross quit smoking. He did have a relapse, but so many people knew of the Tobacco Free Pride campaign that they helped him quit again.

“You have to know your triggers,” he said.

Lady J said she similarly struggles with wanting to smoke again, but “the campaign holds me accountable. We’re allowed to make mistakes, as long as you learn how to work through your coping mechanisms.”

After the discussions, the summit concluded with performances by Lady J and Montell Infiniti Ross, the summit’s emcee Sylvia Nyxx, Becky with the Split Ends, Coco Monet, and Nick Bone-Us.

To see more photos from the LGBTQ+ Youth Substance Use Prevention Summit, check out our album on Facebook.

To view Lady J and Montell Infiniti Ross' conversation about the Tobacco Free Pride camping, check out this video.